Category – Easy
View rating: 9 out of 10
A little over 1 mile round trip, 400 feet elevation gain

This hike is often overlooked, especially by Tahoe locals who celebrate the big hikes. But this hike shouldn't be dismissed, because it has spectacular views. (And it holds the record for the highest angle you can easily get to above the shoreline - note the word “easily.” That fact, along with what I'm going to tell you at the bottom of this post, will allow you to win more bets at the bar than at the gaming tables.)

To get to this short, beautiful hike, drive to Crystal Bay on the north shore. (The state line between California and Nevada runs through the middle of town. In fact, it runs through the middle of the lobby of the Cal Neva hotel – the one that Sinatra used to own.)
Northeast of the state line (just northeast of the Tahoe Biltmore Hotel), turn west on Reservoir Rd. Drive two short blocks to Lakeview Ave and turn right. About 1/2 mile up, you will see a gate on the left. That is the beginning of your hike. Park along Lakeview, before you get to the gate. (Don't block the gate, and remember to stay back from the fire hydrant.)
The hike is an old road that makes a comfortable climb of a bit more than 1/2 mile one way.

You'll find an open area at the top with views nearly 360 degrees around, including amazing lake views stretching past the South Shore mountains to 10,400-foot Round Top over 30 miles away.

To the east below you is Crystal Bay and Incline Village, named for the incline railway that hauled wood from the lake back in the 19th century.
To the west below is Agate Bay with the town of Kings Beach. In the distance to the west are the mountains of Northstar, Alpine Meadows, and Squaw Valley.

To the south, you can see the ski runs of Heavenly 25 miles distant.
Be sure to find the “circle” path that takes you in a complete loop around the area. It is paved and dotted with benches for taking in the views as well as informational signs about the area and Tahoe history. 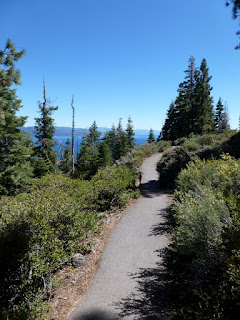 Now comes the information to win those bets about Tahoe hiking trails.
Warning: pesky minutia follows.
When you talk to locals about hikes with great views, they will often tell you about the high peaks, especially those that require real effort to “bag.” If you stress that you want views of the lake, they will mention a range of prominent points on the Tahoe Rim Trail as well as mountains like Maggies Peaks (the south one is best to climb) and, of course, Mt. Tallac, which is considered the best of the bigger climbs because it is closer to the lake than the highest peaks like Freel Peak, Jobs, Jobs Sister, and Mt. Rose.
But let's talk “angle above the water.”
The Stateline Fire Lookout above Crystal Bay will get you to a touch over 7000 feet of elevation just 1/3 of a mile from the shores of Crystal Bay (Incline Village) and Agate Bay (Kings Beach). That puts you 800 feet above the lake just 1760 feet from the shore. This is an angle of 41 degrees. No other easily accessible spot around the lake gets you close to 41 degrees above the shoreline.
What are the comparison points?
In order of ascending angles...
Mt. Tallac is an impressive 9735 feet high, and it is often spoken of as the highest peak right on the lake. But its summit is actually set back 3 miles from the shore. (Although, it is only 1.5 miles from the shore of Fallen Leaf Lake, so one's enthusiasm for Tallac's lake views can be forgiven.) At 3500 feet above Lake Tahoe, it has amazing views, but its angle above the water is only 20 degrees.
East Peak is at Heavenly, and it's an easy hike from the top of the gondola. It doesn't get much attention because it doesn't look like much, but it is a respectable 9500 feet high and only 2.3 miles from the shore. That puts it at 24 degrees above the lake shore, a greater angle than Mt. Tallac.
On the West Shore, Blackwood Ridge up above Homewood and Tahoe Pines will get you up at 7300 feet within 3/4 miles of the lake for an angle of 25 degrees.
West Shore peaks such as Rubicon Peak and Jakes Peak are both an impressive 9200 feet, but they are almost two miles from the shore, or 26 degrees above the shore.
Above Sand Harbor is Herlan Peak at 8840, otherwise known as the Sand Harbor Lookout. At slightly less than 1 mile from the shore, it is 45 degrees above the water, a greater angle than the Crystal Bay Fire Lookout, but much harder to get to.
There is an unnamed peak at 9200 south of Jakes Peak, and it is only 1 mile from Emerald Bay putting it 51 degrees above the shore.
3/4 miles from the Vikingsholm Castle on the shore at Emerald Bay can get you to 8500 feet at North Maggies Peaks and also to 8500 feet along the shoulder of Jakes Peak on the north side of Emerald Bay for an angle of 52 degrees, the highest angle above the shore in all of Tahoe.
But good luck getting to either of those places!
In fact, all but one of the places that can get you at a higher angle above the water than the Crystal Bay Fire Lookout have no hiking trails and are nearly inaccessible.
There is, however, one solid trail that will get you to a higher point within 1/3 mile of the lake, and that is the Bay View trail above Emerald Bay. It goes up Maggie's Peaks (but not directly to North Maggies). Along it, you come to a spot where you can step out to the top of the big rock slide at 7250 feet. It is as grand a view as you can get in Tahoe. (More on that wonderful hike in a future post.) But beautiful as the Bay View vistas are, the trail is steep and somewhat arduous to climb. Thus the Crystal Bay Fire Lookout trail is still the highest angle above Lake Tahoe that one can easily get to.

As of June, 2021, my 18 books have over 16,000 reviews and ratings on Amazon and Goodreads at an average rating of 4.6 stars. Thanks very much to all of you who have posted reviews! I owe it all to you readers. THANK YOU! 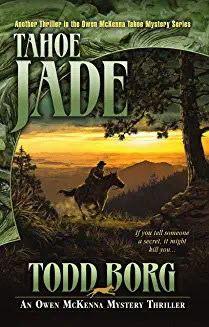